Sclerosing encapsulating peritonitis is an extremely rare cause of recurrent abdominal pain and acute, sub-acute, or chronic intestinal obstruction. There are two types of sclerosing encapsulating peritonitis described: Primary or Idiopathic type (abdominal cocoon) and secondary type. While the cause of primary SEP is unknown, secondary SEP can develop in association with some surgical interventions like “liver transplantation, peritoneal dialysis, peritoneo-venous shunts” in addition to that, some medical disorders(tuberculosis, sarcoidosis) and some drugs use can play a role in secondary SEP development. Previously it is diagnosis was difficult and even almost impossible preoperatively. However, today, because of the development in Computerized Tomography techniques, preoperative diagnosis, although difficult, it could be possible.

We aimed to report a difficult primary SEP case that we could not diagnose preoperatively, review the literature, and emphasize Turkey’s importance.

Sclerosing encapsulating peritonitis is a chronic inflammatory process in which a fibro collagenous membrane encloses the intestine. It is an extremely rare cause of recurrent abdominal pain and acute, subacute, or chronic intestinal obstruction [1–3]. As you know, there are two types of Sclerosing Encapsulating Peritonitis (SEP), primary or idiopathic with unknown etiology and secondary, which may develop in associations with peritoneal dialysis tuberculosis, beta-blocker use, sarcoidosis, peritoneal ventricular shunts, peritoneal carcinomatosis [4–7]. Our concern in this article is the primary Sclerosing Encapsulating Peritonitis (SEP), which is also called an abdominal cocoon.

Abdominal cocoon or primary (idiopathic) Sclerosing Encapsulating Peritonitis (SEP) is a rare chronic inflammatory abnormality in which part or all of the small intestine and other visceral organs are encased in a fibro collagenous membrane. The term peritonitis chronic fibrosis incapsulata was given by Owtschinnikow, who was the first to describe the condition about a century ago [1,8]. However, it was discussed in detail and was termed “Abdominal cocoon syndrome’’ by Foo et al. in 1978 [1]. Primary SEP clinical manifestations are not specific. They are mostly of chronic abdominal pain, recurrent episodes of acute or subacute abdominal obstruction. However, it may present some uncommon, but serious and life-threatening complications, like malnutrition, intestinal necrosis, and enterocutaneous fistula.

The entity looks rare, but it’s not very uncommon for those who live in tropic and subtropics areas as the reports say [8].

We report a case of a young man, 39-year-old, who was complaining of chronic abdominal pain for the last year.

He attended our center nine times within ten-month because of abdominal pain and distention, dyspepsia, vomiting, and diarrhea. Firstly he was diagnosed as having gastroenteritis and treated accordingly. His complaints did not last long after the treatment. Because of complaints reoccurrence, upper gastrointestinal endoscopy and colonoscopy were performed. Endoscopy revealed lower esophagus insufficiency and antral gastritis. Colonoscopy revealed descending and sigmoid colonic diverticulosis. Since these findings could not explain his complaints, he was admitted to the gastroenterology unit hospital. Conservative treatment was started, and oral intake was stopped. The plain abdominal x-ray film was normal. Abdominal Computerized Tomography revealed findings at the level of the terminal ileum that may indicate partial intestinal obstruction, according to the radiologist (Figure 1A and 1B). 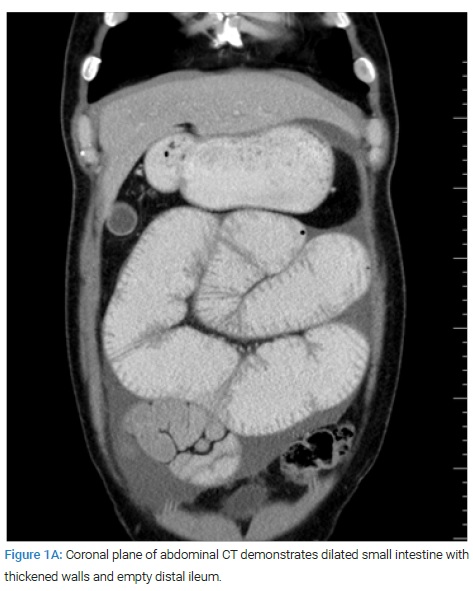 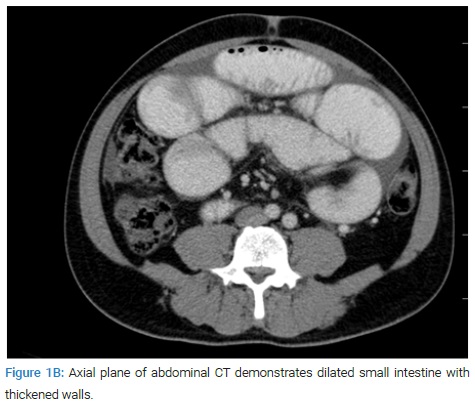 The patient’s condition got worse. Consultation results suggested explorative laparotomy, which was done with a median abdominal incision. On exploration, most of the jejunum and part of the ileum was encapsulated by a fibrous capsule. The part which was encapsulated was dilated while the rest was normal. The sac was excised, and the bowel was freed.

Since there was no strangulation or ischemia, the abdomen was irrigated with saline, and then closed in an anatomic manner. Some of the excised material was sent for pathological study. The patient did fine postoperatively, and no complications were developed. 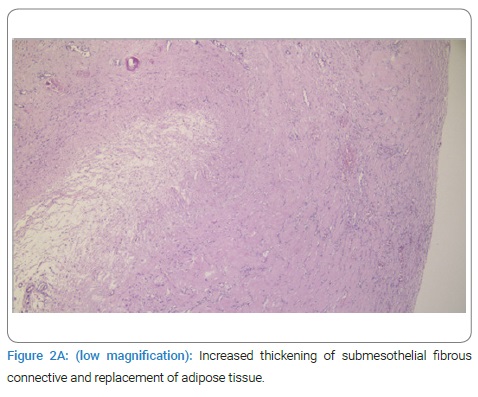 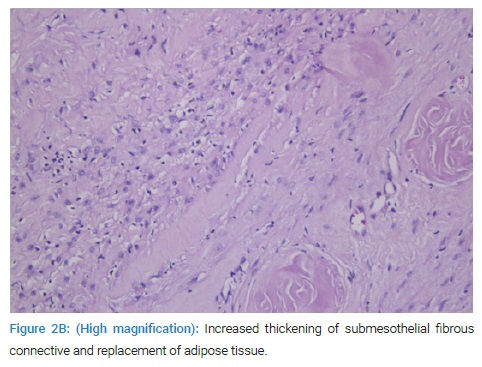 Increased fibrous connective tissue in small bowel mesentery (Figure 1A). The pathologic study revealed SEP. It has been more than a year since surgery; the patient is still doing fine.

Primary peritoneal encapsulation is a very rare condition in which preoperative diagnosis is very difficult or sometimes impossible. The early clinical features of primary SEP are not specific. That is why most of the reported cases were diagnosed intraoperatively [1,3,6,8]. Earlier it was reported that most SEP patients were adolescents or young females.

On the contrary, we have noticed that most of the primary SEP patients are young adult males [1,2,8–14]. In most reported cases, the patients complained of recurrent abdominal pain, nausea, vomiting, weight loss, malnutrition, and acute or subacute, complete or incomplete intestinal obstruction. A high index of suspicion is the most common factor that can lead to its diagnosis preoperatively. As in most of the reported cases, we could not put the diagnosis preoperatively too [2,8,15].

A case report by Naraynsinggh et al. they have noticed tow clinical findings on peritoneal capsulation patients. They can lead to a very high index of suspicion, which may help in thinking of SEP preoperatively. Naraynsinggh et al. on abdominal physical examination of SEP patients have notice soft distention on one side and a firm flat side. The part which encapsulated was firm and flat because of the fibrosis surrounding it [16]. With the development of contrast-enhanced Computerized Tomography (CECT) scan, preoperative diagnosis becomes possible. Various CECT images have been described to indicate SEP. Delayed bowel transit, bowel wall thickness, mass conglomerated bowel loop (cauliflower sign), and localized as cites can be visualized by CECT scan as an indicator of SEP [17]. However, it still needs a high index of suspicion and experience to put its’ diagnosis preoperatively. In a case report, Karan et al. have put the preoperative diagnosis of primary SEP in 52-year-old man by CECT help [9].

Depending on the extent of the intestine and visceral organ encasement, primary SEP can be classified into three types. Type 1, a fibro collagenous membrane encases only part of the small intestine. Type 11 is indicated when the entire intestine is encased. While in Type 111, the entire intestine is encased as well as other organs like the appendix, caecum, ascending colon, stomach, liver, and ovaries as well [2,12,13]. Depending on the type of primary SEP the physical findings may be different. For example, the previously pointed two clinical findings can be seen in Type 1 and 11. However, it is not logical to be seen in Type 111. Our case was Type 1 idiopathic SEP. However, we could not notice any of the two important clinical findings. Because of the delayed diagnosis and treatment, our patient had a low life quietly for some time.

In a wide review published by Akbulut, he reviewed articles published in English from 2000–2014. He pointed Turkey to be among the first three countries which published the highest number of patients and articles concerning idiopathic SEP. China had the highest number of cases followed by India and Turkey [8]. When we compare the number of cases reported to the population, Turkey will be the first country to have the highest number of abdominal cocoon cases. This makes it more important for Turkish doctors or doctors practicing in Turkey to know and think about SEP in a patient with unexplained recurrent abdominal pain. There is a good number of primary SEP cases diagnosed and treated in Turkey. Some of them were reported in different medical journals [3,8–14].

The abdominal cocoon can be mixed with tow similar entities from a clinical point of view; internal herniation and congenital peritoneal encapsulation [3,8]. Previously, the abdominal cocoon was thought to be common among young girls patient [1]. However, most of the reported cases were young male patients [2,15,16].

In conclusion, Turkey is among the first three countries with the highest number of abdominal cocoon cases. Its diagnosis is difficult but not impossible. It needs a high index of suspension and experience. Surgical treatment is the only choice of treatment for symptomatic cases.

The authors declare no potential conflicts of interest with respect to the research, authorship, and/or publication of this article. Informed consent was obtained for this publication.

© 2022 Müjdat Balkan. This is an open access article distributed under the terms of the Creative Commons Attribution 4.0 International License (CC BY-4.0).