Objectives: Cervical cancer is one of the common gynecological cancers that have high mortality and morbidity rate in developing countries because of late presentation due to lack of awareness programs and limited medical facilities. Brachytherapy is one of the modalities in its treatment. Much Data is available in the literature for Low Dose Rate (LDR) and High Dose Rate (HDR) Brachytherapy (BT) with little published data for Moderate Dose Rate (MDR) BT. Our objective of the study is to measure the Overall Survival (OS) and Disease-Free Survival (DFS) in patients of cervical cancer at different stages treated with concomitant chemoradiation followed by MDR-BT.

Study design: It is a prospective observational study.

Materials and Methods: This prospective study was conducted at MINAR cancer hospital, Multan, Pakistan. All biopsy has proven cervical cancer patients treated with concomitant chemoradiation followed by MDR-BT were included in the study to evaluate the outcome of treatment.

Conclusion: Results of Concomitant chemoradiation (ERBT) followed by MDR-BT in terms of OS and DFS are comparable with LDR and HDR outcomes with acceptable radiation-induced toxicity. So is a reasonable choice for treating cervical cancer in cases where LDR or HDR is not available.

Cervical cancer is the second commonest cancer to affect women globally and is one of the leading causes of death among women worldwide. Approximately 500,000 new cases are diagnosed, with 270,000 women deaths yearly. Cervical cancer is second only to breast cancer for cancer-related mortality among women. An estimated 80% of cervical cancer-related deaths occur in developing countries, and Pakistan is one of those [1]. Major factors for this high mortality in low socioeconomic countries are lack of screening, early diagnostic and treatment facilities. 80%–90% of histological type of cervical cancer is squamous cell carcinomas (sq. cell ca) that are radiosensitive and enhances the prognostic outcome. Overall, five years survival rate is higher for sq. cell ca. Compared to other adenocarcinoma variants with a 92% five-year survival rate for early invasive and nearly 100% in pre-invasive disease. The outcome is better in low risk or high socioeconomic countries than poor countries, with a five-year survival rate of 72% in developed and 48% in developing countries. The most likely causes of this difference are lack of medical facilities and seeking medical treatment in the late-stage [2]. Radiotherapy (RT) with Concomitant Chemotherapy (CCRT) or without chemotherapy is the definitive treatment for cervical cancers stage IB-IVA. CCRT reduces the recurrence and improves the overall survival [3–5]. The National Cancer Institute strongly recommends CCRT. The only drawback for CCRT is the increased frequency of hematological and gastrointestinal toxicities [3,6]. Brachytherapy is an important component for patients with cervical cancer planned for RT [7,8]. Over the past few years, the Brachytherapy technique has evolved from 2-dimensional image-based (2D) to 3-dimensional images guided Brachytherapy (3D-IGBT). Although this transition from 2D to 3D-IGBT resulted in better local control and reduced recurrence rate, 2D BT is yet serving the purpose in developing countries to treat cervical cancers [3,9]. The Brachytherapy always uses radiation sources enclosed within a non-radioactive capsule. Although sources can be delivered manually but more common is through a technique “after loading.” Manual delivery of Brachytherapy carries the risk of radiation exposure to clinical staff. On the other hand, after the loading technique first, non-radioactive applicators are accurately placed in the treatment site by the operator then imaging is done to locate the applicators’ position [10]. After confirming position, applicators are connected to an ‘after loader’ machine containing radioactive sources through a series of connecting tubes. When the procedure is complete and the planned dose has been delivered to the patient, then applicators are carefully removed from the patient body. This technique reduces the dose to operators [11]. BT is sub-classified based on radiation delivery dose rate at point A into high dose rate (HDR-BT) delivering > 12 Gy per hour, Moderate dose rate Brachytherapy (MDR-BT) delivering between 2 Gy–12 Gy per hour, and Low dose rate Brachytherapy (LDR-BT) with dose rate < 2 Gy per hour.

A High Dose Rate (HDR) Brachytherapy machine with cobalt 60 source after completion of 3.5 half-lives entered into Moderate Dose Rate (MDR) Brachytherapy. So treatment of cervical cancer patients was continued with MDR after approval from the ethical committee to evaluate the overall and disease free survival in patients treated with MDR-BT. Total 117 patients were enrolled with a diagnosis of cervical cancer from 2014–2016. Fifteen of them lost without completion of planned treatment. 102 of these completed their treatment as planned. Patients presented in different stages. The frequency of different stages I-IV is shown in (Graph 1). Following inclusion criteria were followed: 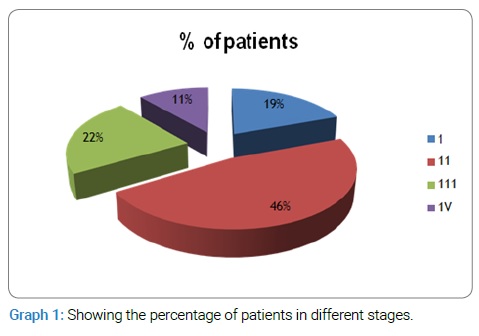 Patients were planned following the recommendation of the American Society of Brachytherapy (ABS). Concomitant chemoradiation was planned with low dose cisplatin, 50 mg at Day 1 weekly and ERBT 1.8 Gray (Gy)/fraction and five fractions per week. The total dose of RT was planned based on prognostic and risk factors, including gross tumor volume, the involvement of parametrium, pelvic lymph nodes, and lymphovascular invasion. Total 40 Gy–50 Gy of EBRT was planned. ERBT was followed by Intracavitary Brachytherapy with Cobalt 60 at MDR with 6Gy per fraction weekly. Total five fractions were planned. BT was done using the Fletcher suit system. Both Tandem and Ovoid were used [3]. Tandem and ovoid were inserted in lithotomic position under aseptic measures. 2D images, including AP and Lateral views using a conventional X-ray machine, were taken to localize tandem and ovoid position. The dose was calculated at point A by applying Dose Convertor Factor (DCF) of 0.6 to dose for LDR-BT [12]. The accumulative dose was equivalent to 80 Gy–90 Gy.
Follow-up and evaluation: A standard protocol for follow-up was followed with follow-up at every 03 months for the first 02 years and 06 months afterward [3]. The patient was evaluated for local and distant recurrence by history clinical and local examination, Laboratory investigations, and imaging modality of pelvic ultrasound on each follow-up. The biopsy was performed in cases with suspected recurrent cervical cancer. Patients were also evaluated for radiation-induced complications. Complications reported after six months of RT were defined as late. The toxicity criteria defined by the Radiation Therapy Oncology Group and the European Organization for Research & treatment of cancer system was used to Grade the complications from 0–5. It grades 0 for no symptoms and five if death occurs directly due to radiation-induced complication. Literature shows that late complications usually appear within 2 years to 4 years after Radiation treatment. But late complications after ten years have also been reported [13,14]. So long time follow-up after RT has been recommended to evaluate and manage the late complications [13].

Patients 102 out of 117 completed treatment as per plan. FIGO stage of enrolled patients at the time of presentation ranged from IB to IVA. Mean age of presentation was 49 years with SD ± 6.3. The meantime of interval between diagnosis and start of treatment was 5.3 days with an SD of 2.9. The mean duration of planned treatment completion was 8.7 weeks (60.9 Days) with an SD of 1.08. Mean follow-up was 4.16 years with an SD of 1.97 and range from 0.18 to 8.53. The outcome of patients at the end of follow-up is shown in (Table 1). 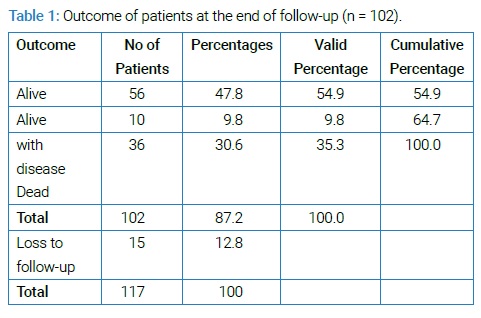 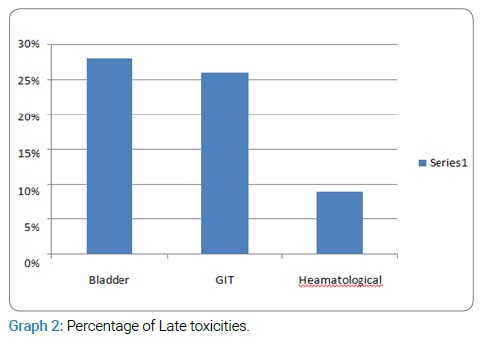 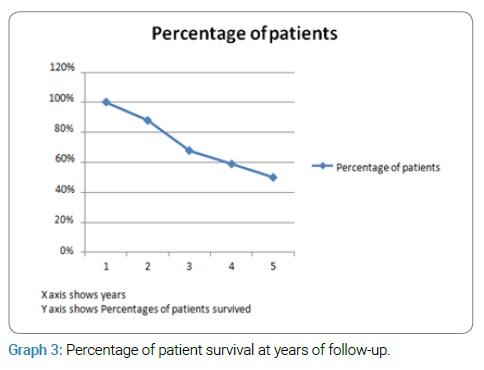 All these toxicities ranged from grade 1 to 2. Vaginal stenosis occurred in 4% of patients—most of the patients recovered from acute bowel related toxicity. Only one patient progressed to grade 4 toxicity. No death due to radiation-induced toxicity (grade 5 toxicity) was recorded. One procedure-related complication of uterine perforation with uterine sound used to measure the length of uterine cavity occurred that was managed conservatively with complete recovery.

LDR-BT with Ra-226 or Cs-137 was used to treat cervical cancers with satisfactory results. However, certain aspects of LDR are troublesome.

HDR has been successfully used in Japan for many years with advantages over LDR, including short treatment time, minimal radiation exposure to staff, easy to maintain patient posture, and applicator in precise position.
On the other hand, HDR disadvantages include added shielding of treatment room and equipment maintenance problems [13,14]. However, the literature shows similar treatment results of LDR and HDR-BT in Japan [14]. Much data is available about HDR-BT and LDR-BT, but Data on MDR-BT is deficient in literature. The average treatment time of MDR is 5 hours that allows carrying out a daytime procedure reducing exposure radiation dose to staff. Moreover, overall treatment time (OTT) that is an important prognostic factor in the treatment of cervical cancer is shorter by ten days with MDR than LDR [6,13].
Dose rate to point A increases with MDR leading to increased risk for late complications [13,15]. The literature review shows an increase from 12% to 32% in overall grade 2 + 3 and from 4% to 22% in grade 3 late complications, despite a reduction in dose of 20%. So greater dose reduction factors than the 20% are suggested to reduce the late complications when the dose rate is increased [12]. Therefore it is recommended that MDR-BT should be done with a reduction of total dose up to 30% compared with LDR. Our BT machine with the source of Cobalt 60 after completing 04 half-lives developed a dose rate < 12Gy per hour as source replacement was delayed because of budget constraints, so we continued BT with MDR to facilitate patients on one side and to measure OS and DFS in patients of cervical cancers treated with MDR and concomitant chemotherapy on the other side. OTT was 8.7 weeks that has an important prognostic factor. OS and DFS with MDR in our study are comparable with those of LDR and HDR (Table 3).

OS and DFS were derived by using Kaplan-Meier analysis that was 66% and 80%, respectively (Graph 4, Graph 5). 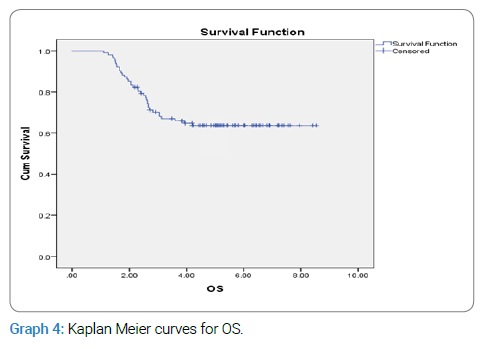 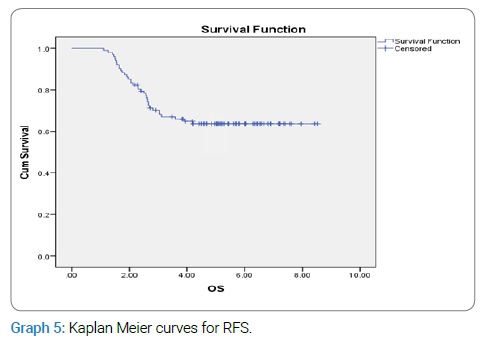 In our patients, OS was 66% and 55% for all stages at 3 and 5 years, while OS with LDR at 3 years and 5 years reported in the literature is 73% and 55% and for HDR is 68% and 54%. The DFS in our study was 72% and 80% at 3 and 5 years. The DFS for HDR and LDR for the same follow-up interval have been reported as 76% & 87% and 59% & 60%, respectively [16,17].
Local recurrence within five years occurred in 18% of patients. 9.8% of patients with local recurrence were alive at the end of follow-up. No patient had distant metastasis. 30.8% of total patients have died at the end of follow-up. Most of them were disease-free and have the primary cause of death unknown. No exact figures in literature for treatment failure or local recurrence; however, different studies show treatment failure and local recurrence ranging between 6%–25% with follow-up from 3 years to 10 years [16–18].

The outcome of concomitant chemoradiation followed by MDR-BT is comparable to LDR-Bt and HDR-BT in OS and DFS with acceptable late toxicity. So MDR is a reasonable choice for treating cervical cancer, especially in developing countries if the dose rate of BT machine with cobalt source is decreased below 12 Gy/hr and replacement of cobalt source is delayed because of budget constraints. It would allow the continuation of BT services better to treat cervical cancer patients with a reasonable outcome.

All authors guarantee that there is no conflict of interest either directly or indirectly.

There is no funding body or sponsor for publication of this article.

All procedures performed in studies involving human participants were in accordance with the ethical standards of the institutional and/or national research committee and with the 1964 Helsinki declaration and its later amendments or comparable ethical standards. Informed consent was taken from patients.

© 2021 Rubina Mukhtar. This is an open access article distributed under the terms of the Creative Commons Attribution 4.0 International License (CC BY-4.0).