Adenomyoepithelioma with Myoepithelial Carcinoma of the Breast: A Case Report

Described in the 1970s by Hamperl [5] and classified in 1991 by Tavassoli [4], AMEs are a rare breast neoplasm characterized by phenotypically variable the dual proliferation of layers or sheaths myoepithelial cells around small inner luminal epithelial cells [3,4]. AMEs have a heterogenous pattern due to the variable proliferation of epithelial and luminal cells. Macroscopically, benign AMEs typically present as well-delineated rounded nodules that have a median size of 2.5 cm [4]. In rare cases, AMEs undergo a malignant transformation of either or both myoepithelial or epithelial components [4], giving rise to a carcinoma, though the adenomyoeptithelimatous appearance is retained in background lesions [10,13–17]. Aggressive myoepithelial components may adopt a spindle configuration and transform into nodules that resemble myofibroblastic lesions [4]. While rare, local recurrence [13,18,19] and distance metastases have been described [20]. Lesions that contain high mitotic rates, infiltrating margins or malignant areas have a high potential for metastasis or recurrence [4]. Malignant progression can have a wide histological grade [21], further complicating diagnoses, and classification.

Here, we describe a case of a 38-year-old patient with no history of breast cancer who was diagnosed with malignant AME in the left breast. We review previously published findings and discuss implications for diagnosis and treatment.

A 38-year-old female presented with a 6-month history of left-breast mastalgia and local diffused swelling, cyclical in nature, and no nipple discharge. On examination, a mobile, irregularly defined lump with mild tenderness was present in the left inner quadrant peri areolar in the left breast. There was no evidence of associated axillary lymphadenopathy.

A core needle biopsy on the initial visit revealed atypical proliferation in a sclerosing lesion, with distorted ducts in a fibrotic background and with some ducts exhibiting proliferation of atypical cells with squamous metaplasia. Differential diagnoses included squamous metaplasia and ductal carcinoma in situ in a complex sclerosing lesion. Fine needle aspiration of the left axillary lymph node revealed reactive lymphoid hyperplasia. An ultrasound revealed an indurated ill-defined area in the left inner quadrant periareolar location about 4 cm x 4 cm with no definitively palpable mass.

Ultrasound-guided needle localization, wide local excision, and frozen section under general anesthesia were offered. The specimen was marked and sent for frozen sectioning; the result was consistent with a benign lesion. Microscopy revealed AME with carcinoma (Figure 1). 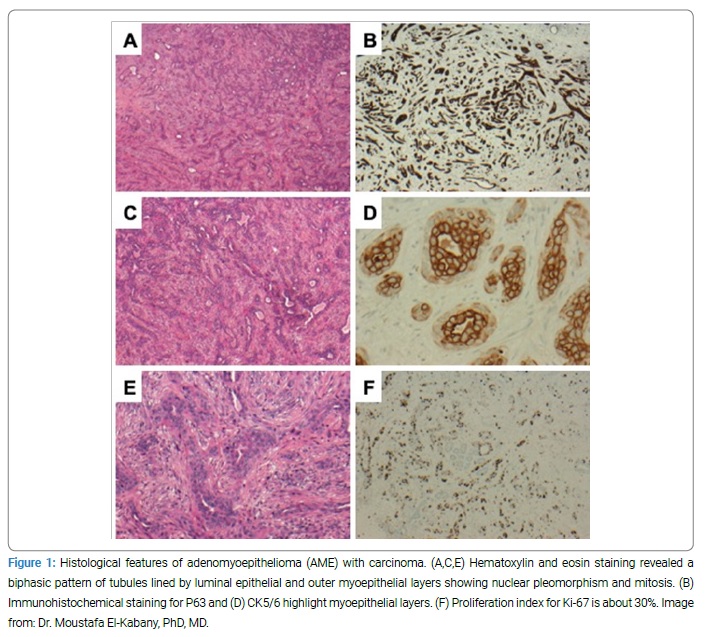 The case was discussed in a multidisciplinary team Breast meeting, and a consensus was reached for left modified radical mastectomy surgery. The histopathology showed a residual focus of myoepithelioma with malignant transformation of myoepithelial component 0.4 cm in diameter and free margins. As there was no need for radiotherapy or chemotherapy, the patient was followed up with the clinic, provided there was no recurrence.

The average age of AME is approximately 60 years, though tumors have been reported in patients ranging from 22 to 92 years, with most cases occurring in women [22–24]. Patients typically present with a single, self-palpable unilateral painless nodule [1,6–8]. AMEs are usually firm-to-hard, well-circumscribed tumors ranging from 1 cm to 17 cm in size that may exhibit small cystic areas [25]. They have been classified into three types: round tubules, spindle cell type, and lobular pattern, with the tubular type being the most common [4]. Lobulated lesions typically have a fibrous septae with central hyalinization or infarction and a variable phenotypic pattern, ranging from eosinophilic and hyaline to clear [4]. In certain cases, the intraductal extension of the lesion in the lobulated variant is exhibited by the presence of satellite nodules. An ill-defined margin characterizes tubular growth patterns [4].

Typically, one epithelial or myoepithelial cells become malignant; however, cases where both cells undergo malignant changes have been reported [26,27]. The malignant component can range from low to high grade [7,21]. Malignant AMEs can appear as benign AME on low power but exhibit areas of increased mitotic rate and atypical cellular cytology on high power; alternatively, they can exhibit clear evidence of malignant transformation on low power in an otherwise benign AME [29]. Signs of malignant transformation include an elevated mitotic index, necrosis, prominent cytological atypia, and an infiltrative growth pattern [1,17, 22,28].

Malignant AMEs can differentiate from metaplastic carcinoma, low-grade adenosquamous carcinoma, papillary carcinoma, and malignant myoepithelioma, among other conditions such as sclerosing adenosis, complex sclerosing lesion, ductal adenoma [28,30–33]. For instance, in Wiens et al. [34], 50% of the sample diagnosed as AME or AME lesions was later re-classified as myofibroblastoma, sclerosing papilloma, radial scar, and fibroadenoma with myoid metaplasia. Differential diagnosis of AMEs should be based on the pattern of malignant growth, the ratio of myoepithelial to epithelial components, the architectural pattern, and immunohistochemistry findings, especially of myoepithelial markers such as p63 [32]. While many markers may overlap with other lesions, a characteristic feature of AMEs is the dual presence of both epithelial and myoepithelial cells [32]. Both spindle cell and lobulated variants of AME can be distinguished from pleomorphic adenoma by the absence of chondroid and/or osseous differentiation in AME [4]. Differentiation of tubular adenoma from the tubular element of AME should be based on the presence of myoepithelial proliferation, which is absent in tubular adenoma, and the absence of sharply circumscribed margins, which is present in tubular adenoma [4].

In almost all reported cases, AMEs are benign [9–13], with mitotic activity ≤ 2/10 HPF [4]. Malignant transformation, and metastasis is rare and indicative of a poor prognosis Xu et al. [35, 36], reported metastasis in 15 out of 47 cases, with common sites including lung, brain, thyroid, and axillary lymph nodes [36,37]. This is suggestive of a hematogenous as opposed to lymphatic spread [36]. The time from initial resection to distant metastases from a few weeks to 12 years [36], with metastatic potential depending on the tissue’s number of mitoses [25]. Aggressive AME is characterized by up to 6/10 HPF, while more than 8/10 HPF is characteristic of a metastatic lesion [28].

Complete surgical excision to negative margins is recommended and may reduce the risk of AME recurrence [32,34]. Extended resection or re-excision is recommended in cases with incomplete or narrow excision margins, as failure to achieve adequate margins can result in recurrence. Mastectomy with sentinel lymph node biopsy has been proposed to treat choice, owing to the rarity of AME to metastasize to the axillary lymph node [25]. Presently, the role of adjuvant therapy, such as radiotherapy and/or chemotherapy, remains poorly understood [34] though unfavorable outcomes have been reported in some studies [27,28,31,38,39]. These not fully understood lesions can exhibit malignant cytological features due to the dissociation of pleomorphic cells, which are, in fact, myoepithelial [3]. However, there is a mixture of different cell types with ductal, apocrine and squamoid differentiations. Bipolar bare nuclei and benign clumps are also present [3]. Overall, the small number of cases published on malignant AMEs precludes the identification of the optimal treatment protocol.

Malignant AMEs is a rare pathology of the breast and require careful histological diagnosis by an experienced pathologist. Because of the rarity of malignant AMEs, treatment guidelines on management do not exist. Current recommendations include complete surgical excision to negative margins or partial mastectomy. Despite the metastatic potential, the need for adjuvant therapy remains unclear. A close follow-up is required to minimize the risk of recurrence.

© 2020 Hind Al-Otaibi. This is an open access article distributed under the terms of the Creative Commons Attribution 4.0 International License (CC BY-4.0).