Isolated nodal recurrence of ovarian cancer is infrequent. For selected patients cytoreductive surgery can improve the survival. The response rate for second line chemotherapy for recurrent ovarian cancer is around 50%–60%, 20%–30% and 10% in platinum-sensitive, platinum-resistant and platinum-refractory patients respectively. IMRT uses a computer algorithm to optimize dose to the target and minimize dose to organs at risk by modulating and shaping the beam either with static or dynamic beams. Many studies showed that higher doses of radiotherapy for limited recurrence or oligometastatic cancer improve good local control in different types of cancer, mainly lung, breast and colorectal cancers. Several retrospective studies for localized ovarian relapse showed the efficacy of radiotherapy doses in the range of 45Gy–60 Gy using involved field.

In this article we are presenting a case of extensive refractory isolated nodal recurrence of ovarian cancer which was successfully treated with Rapid Arc radiotherapy technique.

The majority of patients with ovarian cancer present with advanced stage and the standard treatment is surgical intervention with induction or adjuvant chemotherapy [1–3], although whole abdominal irradiation was tried in 1970 as adjuvant treatment for early stages of ovarian cancer after adequate cytoreduction, the development of effective cytotoxic drugs limited its use except for palliation [2–4].

Most patients with advanced ovarian cancer relapse systemically, and only a few patients develop locoregional recurrence without systemic spread [2,3]. Nodal relapse as a component of systemic disease is common, isolated nodal recurrence is infrequent [5,6].

The concept of oligometastasis encouraged research into the use of local ablative therapy for the treatment of cancer, mainly surgery and radiotherapy and the development of new radiotherapy technology like Intensity Modulated Radiotherapy (IMRT) and Stereotactic Radiotherapy (SBRT), which can deliver higher doses to the tumor and spare organs at risk, stimulated the appetite to reconsider curative radiotherapy for oligometastatic disease in ovarian cancer.

Our case is an 84 year old female diagnosed in 2006 with stage 111c high grade serous (HGS) ovarian cancer. She had optimal debulking surgery with no residual disease and standard adjuvant carboplatin and paclitaxel chemotherapy completed in June 2007 with normalization of CA125. CA125 began to rise in April 2016 but with no definite radiologic recurrence until November 2016 when PET scan confirmed FDG-avid, small volume nodal recurrence in the left supraclavicular, right periphrenic, para aortic and mesenteric nodes and CA125 was raised at 384 U/mL (normal range 0.6 U/mL–35 U/mL). Given her age and medical comorbidity (anti-coagulated for aortic stenosis) she was treated with single agent carboplatin chemotherapy and completed 6 cycles (despite requiring inpatient therapy with prolonged infusion time and anti-histamine prophylaxis for acute hypersensitivity reaction to carboplatin from cycle 3 onwards. She had a partial response with CA125 improvement to 199 and small volume residual disease. Her disease relapsed again in November 2017 with rising CA125 and recurrent lymphadenopathy. Confirmatory biopsy was performed as part of work up for the FORWARD 1 clinical trial. This confirmed recurrent HGS ovarian cancer but she was unsuitable for enrollment on the study. She received 6 cycles of single agent liposomal doxorubicin with partial response and treatment completed in October 2018. Unfortunately her disease relapsed again in February 2019 with rising tumor markers and her restaging CT and PET scan showed FDG avid  mesenteric, paraaortic nodes (largest 4 cm), right periphrenic 2.2 cm  (SUV 9.2) and left supraclavicular nodes 1.9 cm. Of note, genetic testing showed no germline BRCA 1 or 2 gene mutation and her tumour was MSI stable. As she had struggled with toxicity from her prior chemotherapy and had oligometastatic disease she was referred to explore any role for radiotherapy (Figure 1). 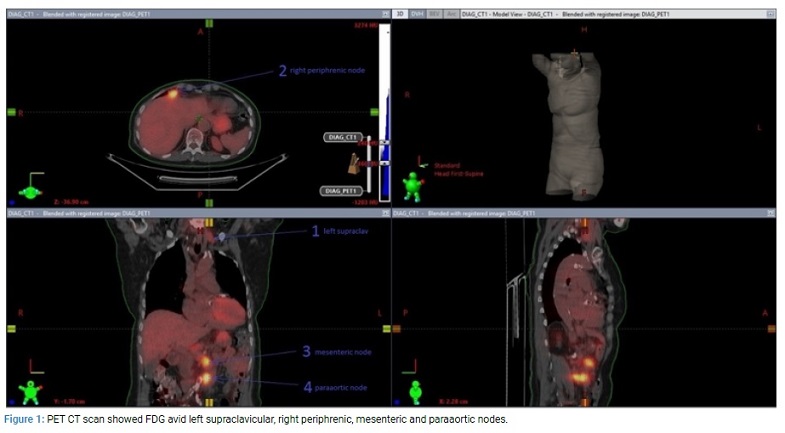 The patient was scanned in a supine position on a CT Simulator (GE Discovery STE) at 2.5 mm thickness throughout the neck, abdomen and pelvic region. These images were imported into Eclipse (version 15.5.11, Varian Medical Systems) treatment planning system (TPS).

The organs at risk (OAR) considered were: stomach, small bowel, kidney, liver, pancreas and spinal cord. All of them were outlined on each image.

The intended prescribed dose was 50 Gy in 25 fractions to PTV1 and PTV2, 5 fractions per week with 2 Gy per fraction.

The Eclipse AAA 15.5.11 algorithm was used to calculate volume dose. Both treatment plans were calculated by using a tissue heterogeneities method and the grid size of calculation was 2.5 mm.

Single direct photon beam of 18 MV was used to generate the plan for PTV1. 50 Gy was prescribed to reference point, according to the International Commission on Radiation Units and Measurements (ICRU) dose specification and reporting.

As input data for optimization according to department protocol we use constraints as in (Table 1). 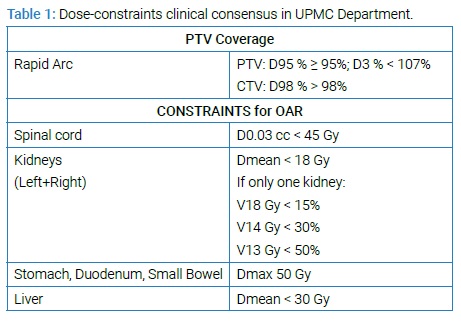 Also according to the ICRU report 83 [10], to analyze the uniformity of dose distribution in the target volume, the mean dose, dose range and homogeneity index (HI) of the VMAT plan were calculated. For HI formula 1 was used.

The planning goals are shown in (Table 2). 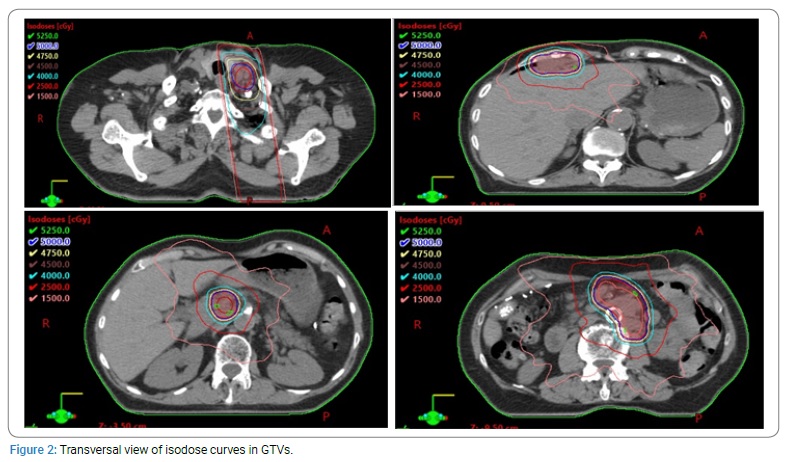 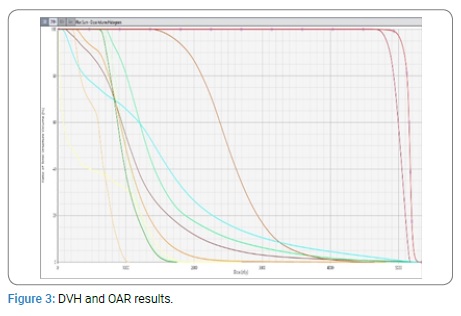 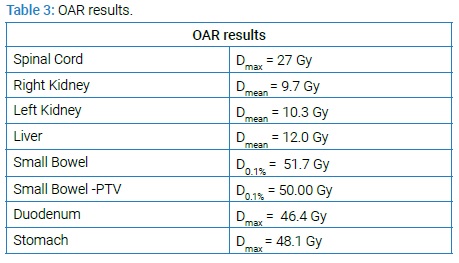 She had PET CT scan 3 months after radiotherapy which showed resolution of left supraclavicular node and paraaortic nodes with faint FDG uptake in the right periphrenic and mesenteric nodes. 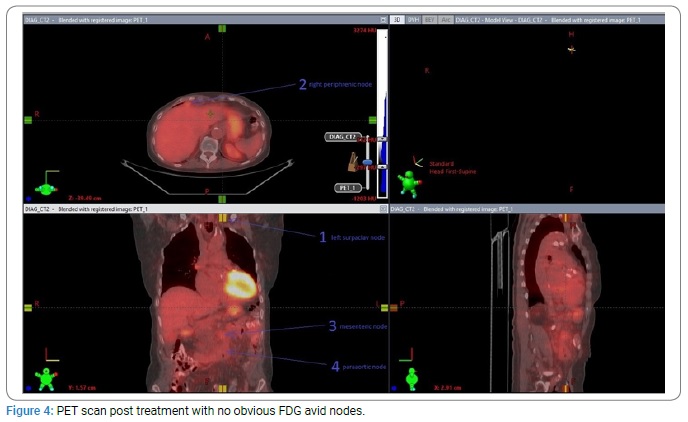 The response rate for second line chemotherapy for recurrent ovarian cancer is around 50%–60%, 20%–30% and 10% in platinum-sensitive, platinum-resistant and platinum-refractory patients respectively [12,13] and for selected patients cytoreductive surgery for limited ovarian recurrence can improve the survival [12–14].

Ovarian cancer has a unique pattern of dissemination through the peritoneal cavity and could remain confined to it for a significant time, and this created the idea of whole abdominal radiotherapy as adjuvant treatment after adequate cytoreduction in early stages [15].

With the limitations of the techniques and radiotherapy machines in the past and to treat a large volume with a biologically higher dose and minimizing the toxicity, a moving strip technique which is treating a small strip daily subsequently was thought superior to open field technique which is treating the whole volume daily. However, the strip technique has many limitations, including the potential toxicity, accelerated proliferation of malignant cells due to prolonged treatment time and uncertainty about dose delivered to the moving abdominal organs [16].

Due to the limitations of whole abdominal radiotherapy and also the development of effective cytotoxic drugs mainly platinum and the systemic pattern of relapse in ovarian cancer, use of radiotherapy has been limited to palliation.

IMRT uses a computer algorithm to optimize dose to the target and minimize dose to organs at risk by modulating and shaping the beam either with static or dynamic beams.

Many studies for radiotherapy with IMRT or Stereotactic technique with radical doses for limited recurrence or oligometastatic cancer showed good local control in different types of cancer, mainly lung, breast and colorectal cancers [17–19].

Several retrospective studies for localized ovarian relapse showed the efficacy of 45 Gy–60 Gy involved field [20–22] and a local control ranging from 89%–100% was reported in some studies [21]. In other studies, involved field radiotherapy achieved a similar PFS and a better OS when compared with salvage chemotherapy [21,22].

Trippa, et al. [23] reported a complete metabolic response in all treated lesions 3 months after the end of SBRT in nodal recurrence from ovarian cancer, however only two sites were involved in their study.

Roberta, et al. [25] have treated 82 patients (156 lesions) with SBRT for a median dose of 24 Gy/3 fractions, 60% had complete radiological response, however they allowed concurrent chemoradiotherapy.

In a study by Chundury, et al. [26]  for 33 patients (49 lesions) with recurrent ovarian cancer who were treated with IMRT for a median dose of 50.4 Gy, 35% achieved complete metabolic response.

Although we are presenting just one case, our patient had multiple sites of nodal disease compared to other series which treated just 2 lesions. Also, we have used Rapid Arc which proved to be effective in our case and achieved good dose homogeneity and spared organs at risk as stereotactic radiotherapy. It is worth mentioning this patient was premedicated with antiemetics and tolerated the treatment well without significant side effects.

Our case and other studies confirm the feasibility and efficacy of treating refractory or recurrent nodal relapse of ovarian cancer with a tumoricidal radiotherapy dose with acceptable toxicity.

More studies with a larger number of patients and long follow up to determine patterns of recurrence might be able to answer those questions.

Involved field radiotherapy with tumoricidal dose using Rapid Arc technique for treatment of refractory multiple nodal disease of ovarian cancer is feasible and effective and should be tried specially after exhaustion of systemic therapy. However larger studies and longer follow up is required to determine the proper dose and treatment volume.

© 2020 Esam Abdelaal. This is an open access article distributed under the terms of the Creative Commons Attribution 4.0 International License (CC BY-4.0).