In Extramedullary multiple myeloma, muscular involvement not adjacent to bone lesions (Especially multiple and diffuse) is rare. We report a case of multiple myleoma with multiple-diffuse muscle involvement confirmed by biopsy. 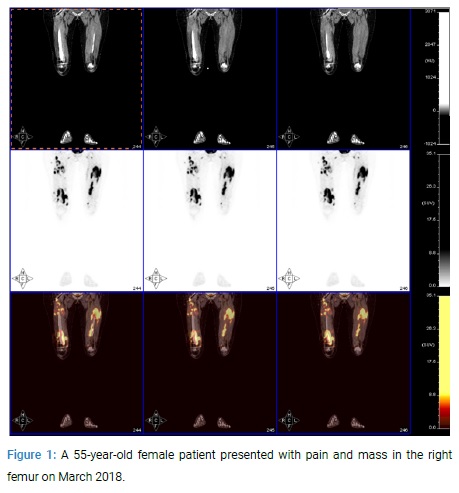 Taken biopsy from bone lesion reported as MM. FDG PET/CT, to control treatment response, 3 months after chemotherapy showed diffuse hypermetabolic activity in multiple muscle groups. Coronal sections of the images taken from the lower extremity, pelvic, femoral and tibial multiple muscle groups of both lower extremities, axial section of the right iliac wing posterior (more pronounced) and lateral hypermetabolic lesions are noteworthy. Another biopsy was taken from thigh to histopathologically verify the findings described in PET/CT. The identified intramuscular masses were reported as malignant infiltration of plasma cells. Intramuscular involvement has no specific clinical signs aside from the local pain and swelling. This complication, a serious condition, is usually incidentally seen during examination for tumor staging. The radiologic view of muscular involvement of MM is intramuscular masses and diffuse muscle infiltration [1]. Imaging with FDG PET/CT is preferably recommended compared to MRI because of revealing more focus to detect extramedullary MM [2]. 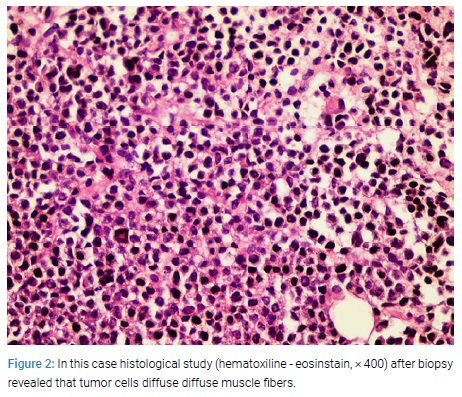 Multiple Myeloma (MM), leading to extensive lytic lesions by infiltrating bone, is the most common primary skeletal malignancy derived from clonal proliferation of plasma cells [3]. Extramedullary MM is the proliferation of malignant plasma cells outside the bone marrow. Extramedullary MM was reported at a rate of 6%-20% and was shown to be associated with poor prognosis [4]. Extramedullary infiltration occurs in various organs such as liver, skin, central nervous system, kidneys, lymph nodes and pancreas [5]. Although MM infiltration to the muscle tissue, which is adjacent to the bone lesion, is common, but intramuscular involvement is very rare (2.2%) [6]. In the literature, focal activity involvement on the muscle tissue is mainly defined as inflammation, granulomatous disease or muscle metastases of different tumors [7,8].

The authors have nothing to declare.

© 2020 Ayse Nurdan Korkmaz. This is an open access article distributed under the terms of the Creative Commons Attribution 4.0 International License (CC BY-4.0).